Oarsome rowers raise over £9000 for the Lifeboats

Maldon's river became alive on Saturday 28th December 2019 as 155 rowers in 64 craft took to the water to raise funds for the RNLI.

Maldon Little Ship Club's annual Sponsored Row and Gig Race lived up to its promised spectacular as the crews raced down river once the starting cannon was fired from the Viking Saga jetty. The large 'four man' gigs started first and headed down river to a turning mark off the Blackwater Sailing Club and the remainder of the rowers in a variety of canoes, kayaks, paddleboards and dinghies rowed to the end of the prom before they returned upstream to a turning mark at Fullbridge and then back to the finish at Hythe Quay. 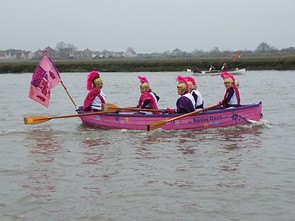 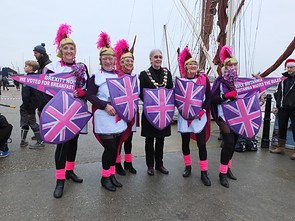 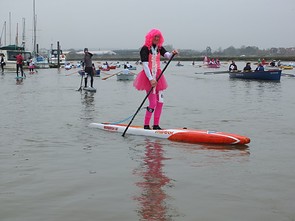 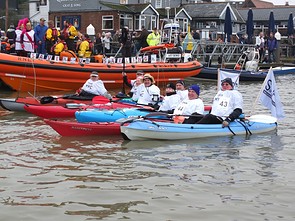 Many of the crews wore elaborate fancy dress ranging from Swan Lake on paddleboards through to Bikers and Frozen themes whilst the flamboyant Basin Oars ladies crew representing Rule Britannia, raised an amazing £4597:00 of the total.

The numerous safety boats and the West Mersea Lifeboat 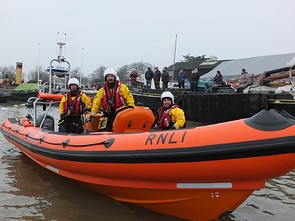 added to the nautical interest on the river pleasing the huge crowd of appreciative spectators who lined the Prom and Hythe and donated generously.

"We could not have asked for a better day, the weather was calm and mild and a fantastic atmosphere prevailed throughout. It was wonderful to see the river alive with so many boats from the smallest paddleboard to the huge whaler "Millie" 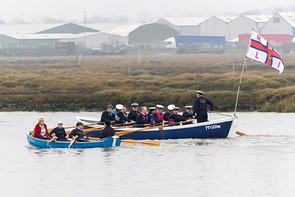 rowed by 10 members of Burnham's lifeboat crew. It is also encouraging to see the under 16 cadets taking part and the huge fancy dress effort made by so many crews"

"It was good to see a big contingent of kayaks from Maldon Yacht Club who with their SoS (Save our Sailing Club) slogan were taking the opportunity to bring to public attention their plight over the future of their club whose lease is threatened with termination by Maldon District Council."

"I would like to thank Maldon Gig Rowing Club and all the people and businesses who have supported this event and helped to make it happen. MLSC is particularly indebted to the following :- Blackwater Sailing Club, Marinestore, Downs Road Boatyard, Landbreach, Hoskin Insurance, Topsail Charters, Essex Community First Aid Event Volunteers, Blackwater Printing, 6791 Engineering Services and also Maldon District Council who allowed this event to take place."

"I would also like to thank Maldon Town Council for their support and the Mayor Flo Shaughnessy for judging the fancy dress and presenting the prizes."

"Finally I would like to thank all the individual rowers and rowing clubs for their enthusiastic support and enjoyment of being part of Maldon's unique maritime heritage, whilst raising a magnificent £9K for RNLI who keep our shores and estuaries safe for us all to enjoy."